As Wildfires Heat Up, Contractors’ Insurance Options Burning Out

The active 2021 wildfire season, which comes on the heels of a devastating 2020 season, has driven home the challenging insurance and legal environments in which fire mitigation contractors operate.

The destructiveness of recent wildfire seasons is well known. In its recent report, “Managing Wildfire Risk for Contractors,” Aon notes that, in California alone, 4.2 million acres burned in 2020, with about 10,000 structures burned in addition to 31 fatalities. In Colorado, three of the four most devastating wildfires in state history occurred last year. Total economic loss from 2020 wildfires was approximately $19 billion, according to Aon.

The insurance market has responded by attempting to restrict capacity to cover the exposure in the West, Aon notes. “Over the past two years, both domestic (including excess and surplus lines) and international (London and Bermuda) markets have taken corrective measures to mitigate wildfire losses to their portfolio,” states the report.

It adds that most wildfire losses to insurance markets originated from California utility companies due to the Inverse Condemnation Doctrine. “While every state has doctrines of inverse condemnation, California has been the only state to interpret this doctrine to apply for utility-related fires,” Aon says.

Essentially, courts in California have held that private, investor-owned utilities (IOUs) are strictly liable for property damage and related attorney fees when there is a utility-related fire. “Strict liability was upheld due to eminent domain privileges the utilities were historically granted,” the report explains. “It has been determined the courts could not nullify a company’s liability from negligence while also exercising eminent domain privileges.”

Contractors Operating in a  Tough Environment

Against this backdrop, contractors attempt to operate, performing work such as vegetation management, utility-related work, and infrastructure development. Aon notes these contractors have seen rapidly rising insurance rates—or a lack of available coverage altogether—that, in some cases, have forced them to decline work.

There has been some protection in the courts afforded to contractors that perform work on behalf of utilities, but, as Aon notes, “A primary concern of contractors operating in the utility space revolves around the ambiguity of future litigation and claims distribution.” The report adds, “The complex and evolving dynamics has the potential to expose contractors who perform work on behalf of utility companies,” where they are pulled into lawsuits that could lead to large indemnification losses. “Utilities also attempt to pull in any contractor that has performed work onsite where a fire began, regardless of fault, leading to material defense costs.”

The Aon report notes utilities have struggled to recover funds from transmission and distribution (T&D) contractors “due to the strict liability precedent, burden of proof difficulty, and the need to maintain claim control in high profile cases during early phases of litigation.” However, the report adds that utilities have had some success subrogating against vegetation management contractors.

Ultimately, the report notes, “The lack of judicial clarity around wildfires and liability, coupled with the unpredictability of future losses, has led many insurers to determine there might not be a suitable cost associated with potential wildfire losses. Over the past year, we have seen significant spikes in insurance pricing for excess casualty risks exposed to wildfire, especially when no exclusionary language is in place. This delta is significant when considering that the coverage was typically included in the carrier’s loss cost rates, prior to the market hardening in 2019.”

The report adds, “Typically, general liability and excess insurance coverage is structured with defense costs outside the limits of insurance. Litigation at times can be a lengthy process, especially with wildfire claims given the difficult nature for the burden of proof. To properly fund for both indemnity and defense costs, carriers have structured the liability towers to include defense inside the limits of insurance. IOUs have had to accept these atypical terms in some instances given the mandate from the insurance carriers.”

For contractors specifically, insurers have also reacted by attempting to exclude wildfire risk, but Aon notes the state of California rejected those filings, finding their intent was against public interest. “This is a different story within the excess when excess and surplus lines carriers are involved,” the report adds, “as these carriers are non-admitted and operate with the freedom of form capabilities. Depending on the scope of operations (vegetation management vs. T&D), a limited amount of capacity may be available to the contractor.” However, the report also states that a large percentage of insurance carriers will not write a wildfire exposed account even with a wildfire exclusion due to the uncertainty of it being upheld in the court of law.

“The entire construction insurance market has been impacted by wildfire, with vegetation management contractors and power line contractors among the most heavily affected,” the report says. “For contractors looking to perform work in this space, meeting contractual obligations while protecting the balance sheet...has become increasingly difficult.”

In effect, the current landscape for contractors becomes one where they require insurance to perform their work, but the insurance market is tightening with respect to both affordability and availability. The insurance market, in turn, is reacting to both the reality of wildfire activity and the uncertain legal environment for the contractors.

When you mix it all up, says Jim Gloriod, chief executive officer, Aon Construction Services Group, “It’s a really complicated issue with no clear-cut answers. And so it’s important to work with contractors who are negotiating contracts and performing contracts with the utilities so that they understand what their exposure is, and then they understand the best way to mitigate and transfer that exposure. There’s no cookie-cutter approach here.”

Aon’s report recommends some creativity in finding solutions through a combination of traditional and E&S markets, reinsurance access for added capacity, captive-related solutions, and catastrophe bonds. But a more permanent fix may have to come from state legislatures. “I think that’s where the solution is actually going to have to come through—the legislature and the government—around, how do you protect for these catastrophic risks and at the same time make the more predictable exposures able to be insured through the commercial market?” says Gloriod. 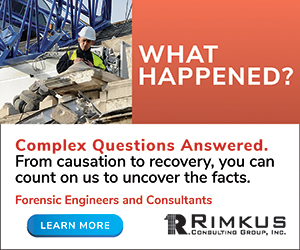